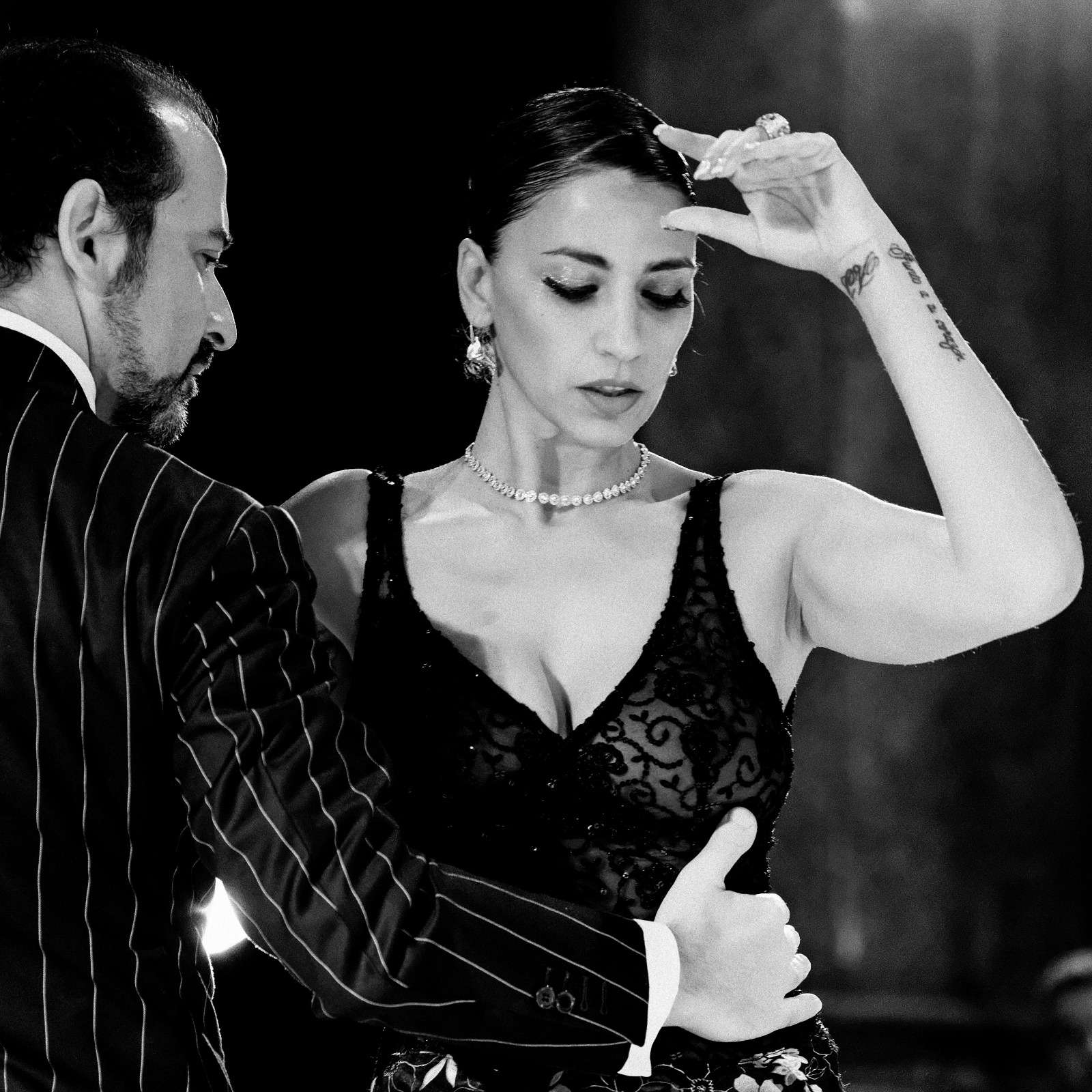 ENGLISH
Marcela and Stefano started their professional career as a couple in 2002 in Taipei: the opera was “ Maria de Buenos Aires” by Astor Piazzolla, directed by the Argentinian conductor Juan Josè Mosalini. At the moment they are part of different Dance Companies, performing in different shows:

During their career they have danced with leading contemporary musicians and orchestras on the world scene:

They have been part of several Argentine tango companies in numerous productions:

They have various productions to their credit:

They began their educational path together in 2002 teaching permanently in the cities of Turin, Genoa, Pisa, Lucca and Asti.

In 2002 they founded the Cultural Association Tango Torino in Turin with the mission of disseminating the culture of Argentine Tango as Tango dance, with regular courses for different levels and as a social entertainment dance through a stable milonga still alive today in the Turin landscape.

In 2007 they founded the ASD Club Almagro, the center of all educational activities and in 2009 they built the first Tango House in Turin, the Almagro Club, a space designed and created exclusively for Argentine Tango.

They prepare a training course that starts from the basics of Tango dance for amateurs and leads to the training of aspiring dancers and professional teachers.

They form a didactic assistance group that every year assists them in the training path of the school.

They set up a choreographic workshop for non-professional dancers, a selection of which form the Almagro Company, the dance company with which they produce Una Historia de Tango which debuted in 2016 at the Teatro Nuovo in Turin.

Every year they are invited to participate in numerous international festivals and to perform in the most representative milongas, from Italy to Buenos Aires.

In March 2011 they were selected by the Congreso Internacional Tango Argentino (CITA) de Buenos Aires, together with twenty pairs of artists, to give life to the XIII edition of the Cosmo Tango, an event that every year brings together the major representatives of Argentine Tango in Buenos Aires. world.

Marcela was summoned by the Gobierno de la Ciudad de Buenos Aires in 2017 and 2018 as a juror at the Mundial de Tango, the World Tango Championship that takes place every year in August in Buenos Aires.

In 2019 they are summoned by the Gobierno de la Ciudad de Buenos Aires to the Mundial de Tango, World Tango Championship as teachers, giving lessons at the Usina del Arte in Buenos Aires, home of the competition.

In 2019 they are also invited to the Academia Nacional del Tango in Buenos Aires, an institution of the Ministry of Education and the Secreteria de Cultura de Buenos Aires, to support a series of lessons.

In 2022, el Mercado Industrias Culturales Argentina, a central event in the public policy system for the marketing of products and services of the national and international Argentine Cultural Industry sector, were summoned by the Gobierno de la Ciudad de Buenos Aires to represent Italy at MICA.

They are regularly part of the jury of the European and Italian Championships organized by MetroTango, sub-venue of the World Championships in Buenos Aires.

They are the organizers of the Tango Torino Festival which takes place every year since 2001 during the Easter period in the magnificent setting of the Reggia di Venaria and in the headquarters of the Lingotto di Torino.  An international event which, with the success of recent editions, has become one of the major events in the world.

In 2017 and 2019 the Festival receives the nomination for Premios Tango, the Oscars of Tango of Buenos Aires, as one of the three finalist events in the International Festivals category.

They are the organizers since 2007 of the International Festival of Tango on the Sea in collaboration with Costa Cruises, now in its fifteenth edition.

Since 2016 they have stably organized the Metropolitan Tango Championships in Turin and Piedmont.

Tango in the Word